It is time to fasten those seatbelts because the ride of a lifetime is at stake as Tsogo Sun launches their hottest promotion of 2017. A total of R9 million in cash and cars are up for grabs, including three sexy Maserati Ghiblis that could be yours with the Dream Chaser promotion taking place at three of Gauteng’s premier entertainment destinations – Gold Reef City, Montecasino and Silverstar Casino.

The official launch event was held at Gerotek Test Facilities, where a select few of local media, celebrities, and influencers got to test drive the beautiful Italian machines. 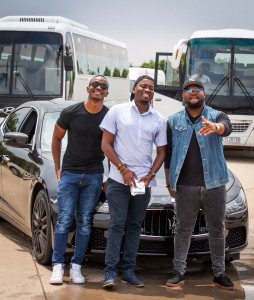 Running until Friday, 31 March 2017, this exhilarating promotion is set to reward three lucky winners with a luxury super car and it’s as easy as playing slots or tables over the promotion period as a Black Rewards cardholder. In true Tsogo Sun style, this promotion promises to deliver a thrilling gaming experience with jaw-dropping cash prizes to be won at draws taking place on the following dates:

Saving the best for last, Dream Chaser will end on a high with the explosive finale car draws, where one lucky winner will drive away in a brand new Maserati Ghibli at each of the participating casinos.  The draws will take place at Silverstar Casino on Wednesday, 29 March at 20h00, Montecasino on Thursday, 30 March at 21h00 and Gold Reef City on Friday, 31 March at 21h00.

“At Tsogo Sun, we are all about creating amazing experiences for our loyal cardholders: three months, three casinos, three Maserati Ghiblis – it doesn’t get more amazing than that!” says Noeleen Bruton, Group Marketing Director at Tsogo Sun. “We are thrilled to once again host a blockbuster promotion on such a grand scale and look forward to seeing our cardholders drive away in a super car.”

To become a Rewards cardholder and for full details on Tsogo Sun’s Dream Chaser, simply visit www.tsogosun.com. Be sure to follow on Twitter @TsogoSun or like on Facebook /TsogoSun to stay up to date with all the promotional details.

190 thoughts on “STAND A CHANCE TO WIN ONE OF THREE SEXY Maserati Ghiblis WITH TSOGO SUN.”